This picture was taken when they were a few days old

Foxy has been successfully mated to Waggerland Murphy on 28th December 2009 a Blue Merle Dog and hopefully puppies are due around the 28th February.

We will keep you updated. 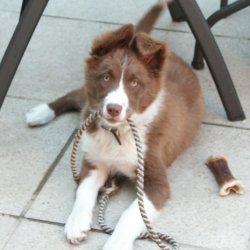 Foxy was born on 8th April 2005.   I can't believe that I have a chocolate and White.  I always said I would stay with black and whites, but that was before I met Foxy. She came to me via email as did Acer, from the same breeder as Acer, Shirley Bell and I want to thank Shirley for yet another very very special dog.  She is absolutely unbelievable.  I cannot believe my luck that I could have another special baby.  She is so very very bright, but she is such a mummy's girl and I have never had that in a bitch before at this young age. .

Foxy is a picture of her at  nearly one year old and what a stunner she has turned out to be. 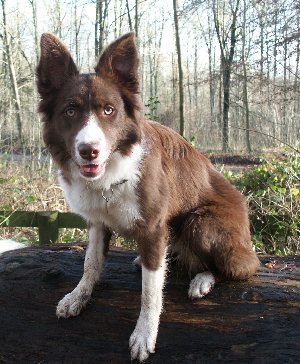 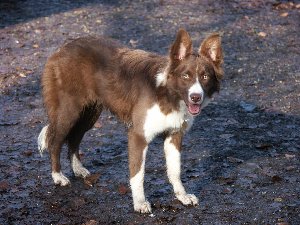 Foxy and her relative Acer

She was even beating Fly and that is saying something

Well done Foxy.  We may just get her into B before the end of the season, otherwise

During 2009 I started to compete with Foxy in Agility also and she has done quite well.

exceptionally well being in the Final and coming 2nd.  Well done Emma you handled her beautifully.

with her work.  She only had a slight blip in DC both days otherwise would have been very very successful.

I look forward to competing with her in C in 2010

Foxy had a wonderful litter of pups in March 2010

Foxy obtained her first qualifier for ticket in May 2010.  What an star you are Foxy.

Foxy then had another season in July and didn't come good again until End September and then Won Open C on 16th October 2010.  Clever Girl Foxy.  Two more qualifiers to go.

Well 2011 came and Foxy got another qualifer for ticket in obedience.  She also was leading Open C and failed scent which she has never done before.  I had found trying to compete in two disciplines, both obedience and agility quite exhausting and after lots of soul search I decided to stop doing obedience and concentrate on agility (this was a very very hard decision has I had been doing obedience for 21 years).